When I tell people that we recently worked with a sleep consultant to help with our newborn and three year olds sleep and I tell them “I can’t believe what a difference it made in our lives”….I usually get a number of questions.  Quite often, and usually from an older generation; I hear “What is a sleep consultant?”  Then, if it is someone with children who could benefit from more sleep, they ask “So…tell me.  What’s the secret?”

It seems a sleep consultants job is shrouded with mystery, awe and some reservation.  Reservation on part of the family that needs help but thinks it is going to get better (IT MUST) or they don’t feel they can justify the cost in hiring such an expert.

The decision for our family quite honestly should have been two years ago for our son.  At that time, I heard Pam speak and knew instinctually that I should hire her for a private consultation.  BUT…a few days later it seemed like things were getting better with his sleep and so I put it off.  To a certain degree it did improve but I didn’t realize how much better it could have been or how bad it was going to get when he lost his soother for sleep.

Fast forward two years.  We now had a three year old and a newborn and a very tired household.

I’m sure for each family not “sleeping well” means something different and everyone has a different breaking point.  For us with our baby (she was 6 months) it meant being very dependent on a soother and that most nights she would wake up about 4 times to either nurse or get her soother popped back in.  For our three year old, it meant sleeping well through the night and having a decent nap but there was a mile long list of demands that needed to be met before he would finally fall asleep and that sometimes took up to an hour and a half!

As a self employed professional (I’m a newborn/family photographer) I don’t get maternity leave.  With both our babies I have been working a month after they were born.  With one baby I could sleep when he slept…but two?  Between work, a husband and two children I was beyond exhausted.  BUT again, I thought….it will get better.  It must.  I would see glimmers of hope…and put off calling Pam.

My husband works out of town for a couple of weeks each month and it was one late night that I finally broke down and realized I couldn’t do it all.  Something had to give and I knew if I could just get some more sleep-life wouldn’t seem so darn exhausting.  I also knew it would actually give me more time to enjoy those things I love and give my husband and I more time to enjoy each other.

I entered a contest Pam was running (even though I felt nervous and almost a little apprehensive that it showed some sort of weakness on my part-like I should have it all together enough to have two kids who were good sleepers) and anxiously waited to see who would win.

A few days later…I heard the incredible news.  Our family and our story and won a consultation with Pam!!!

After we chatted and had set up our time to meet (we had her come to our house to meet the family and our children) it felt like the week leading up to that meeting was the LONGEST week of my life.  I knew a life raft was on its way and it couldn’t get here fast enough!

Again at our meeting I was nervous Pam was going to look at us and see fault with our current situation…and very tactfully say “Well what did you expect doing it like that?”  NOTHING could be further from the truth.  And this is where the SECRET comes in.  It’s Pam.  She’s the secret.  You could read any book you wanted to on sleep techniques/training for your little ones…but you would never have the full picture…not even close….without Pam.  Never once did Pam look at us with any hint of judgment or superiority.  She was our ally. She was in our corner.    She was going to cheer us on, celebrate our victories and encourage us when it seemed like we weren’t quite there yet.

Upon leaving our home, my husband and I immediately knew we loved Pam and were in great hands for this new “adventure”.  A few days later, she sent us each child’s individualized sleep plans; we took a deep breath and jumped in.

I poured over those plans.  Read them and re-read them.  I was really uneasy.  Nervous I was going to do it wrong or worried how the children were going to respond.   And I’m not going to lie.  It was tough those first few anxious nights.  With every change comes a little resistance but both children surprised us with how quickly they responded to Pam’s gentle plan.     And then, there was Pam; right beside us.  Answering questions, coaching, re-directing and cheering us on.

Within a few nights our baby, who had been waking up numerous times a night to feed; actually dropped the one feed Pam and I had left in the schedule!  She chose to sleep!  She also found her thumb, cuddled her new stuffy and often woke up with a giggle.  Now a month and a half later my darling baby girl sleeps a minimum of 10 hours a night without waking, has three solid naps and by everyone else’s admission, is one of the happiest babies they have ever seen.

Our three year old has also had an amazing transformation.  Throughout the process with Pam, we have modified the plan to work out what’s best for his sleep plan.  Originally leaving his nap in, it has since been replaced by “Quiet Time” and an earlier bed time.  About a week ago, he went to see a Musical Production that kept him up quite a bit later than his new bedtime.  I was worried how it was going to affect him and was especially worried he may not be able to stay awake without the nap he used to have.  To everyone’s surprise, he had no trouble staying awake, and the next morning, when he woke up at his usual 7 am wake up time, he told us he was still tired and when back to sleep!  This happened again at 8:30 and he went back to sleep until 10!  Because of the gift Pam has given us, our three year old, at this early age, now knows how much sleep his body requires and is learning the precious gift and power of sleep.

As for my husband and I?  We too are going to bed significantly earlier than before, are going on date nights once a week and are feeling more rested and energized than we have in years.

From the bottom of our hearts Pam; we are so very grateful for the gift you have given all of us!  You are a rockstar!!! 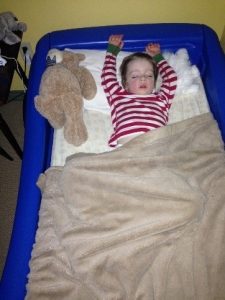 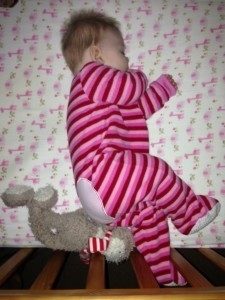